Ellen Susan "Dolly" Gibb (née Box; 26 April 1905 – 5 June 2019) was a validated Canadian supercentenarian who was the oldest living person in Canada at the time of her death.

Ellen "Dolly" Gibb was born in Winnipeg, Manitoba, Canada, on 26 April 1905. Her parents were John Box and Virginia Beauvette. Her father was a prospector for most of his working life and was one of those seeking fortune in the Klondike gold rush. Her mother died when she was only 5 years old. Gibb and her younger siblings were raised by their father and their oldest sister, Nora. Since then, she has always lived in urban settings, as she has less than fond memories of picking potato bugs on the farm. She has used the nickname Dolly since her late teens.

Gibb spent her first 36 years in Winnipeg, her next 64 years in Thunder Bay and the most recent 14 in North Bay; she.never smoked, and never drank until her seventies. Her family attributes her longevity to genetics, eating well but in moderation, and lots of full-fat cream and butter.

Ellen Gibb had been the oldest living person in Canada since the death of Lilian Cornell on 11 January 2016.

On 26 April 2019, Ellen Gibb celebrated her 114th birthday. On that day, Nipissing MPP Vic Fedeli presented her with a celebratory scroll from Premier Doug Ford.

Dolly on her 110th birthday 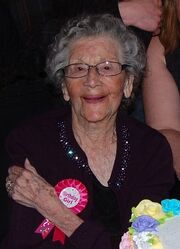 Ellen Gibb on her 112th birthday