Elizabeth Francis (born 27 July 1909) is an American supercentenarian who is the oldest known person living in the U.S. state of Texas. Her age is currently unvalidated by the Gerontology Research Group (GRG).

Francis was born on 27 July 1909 in Louisiana, USA, and later moved to Houston, Texas. In the 1970s, she ran the coffee shop at Houston TV station KTRK-TV. In February 2021, she reconnected with her old friend, news anchor Dave Ward, via Facetime. Francis currently lives with her daughter in Houston. 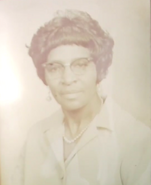 Retrieved from "https://gerontology.wikia.org/wiki/Elizabeth_Francis?oldid=161780"
Community content is available under CC-BY-SA unless otherwise noted.