Elena Menez Rabadan died in Mexico City, Mexico on 12 August 2020 at the claimed age of 110 years, 199 days. She was anonymous until her death. 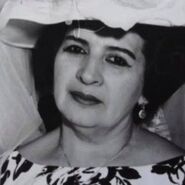 Elena Menez Rabadan at the claimed age of 110 with her niece Victoria Moreno.