Ceccarelli was born in Willits, California, USA, on 5 February 1908. She was the first of seven children born to Italian immigrants Agostino and Maria Recagno. She married Elmer “Brick” Keenan and moved to Santa Rosa, California, where he worked as a pressman for the Santa Rosa Democrat. When he retired after 36 years, they returned to Willits. After her husband's death in 1984, she married Charles Ceccarelli in 1986. He died in 1990.

Ceccarelli currently lives in Willits, California. She lived in her own home until the age of 107, after which she moved in to a senior living centre. She became a supercentenarian in February 2018, and celebrated her 111th birthday in February 2019.

Edie Ceccarelli with her parents and siblings.

Edie Ceccarelli on her 100th birthday. 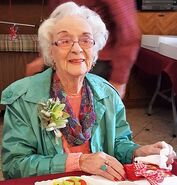 Edie Ceccarelli celebrating her 113th birthday.
Add a photo to this gallery

Retrieved from "https://gerontology.wikia.org/wiki/Edie_Ceccarelli?oldid=164605"
Community content is available under CC-BY-SA unless otherwise noted.