Ebeltje Boekema-Hut (born 31 August 1911) is a Dutch centenarian who is currently the oldest living person in the European Netherlands.

Ebeltje Boekema-Hut was born in Zevenhuizen, Groningen, Netherlands on 31 August 1911 to parents Jan Hut (1871–1957) and Bouktje Linker (1871–1969). Her father was a farmer. She married Lammert Boekema on 8 November 1935. At one point, Ebeltje and Lammert took over the farm and got four daughters. Lammert died on 28 March 1990 at the age of almost 81. In 2007, she moved to a retirment home in Leek. She credits her longevity to being thankful and being happy. Being a Christian, she says she lives life like Psalm 23.

She became the oldest living person in the European Netherlands after the death of Cornelia Boonstra-van der Bijl (as Maria Luisa Benjamin lives in the island of Aruba) on 15 May 2021. 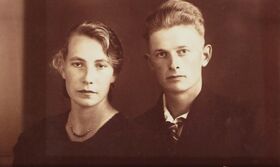 Ebeltje and Lammert in their younger years. 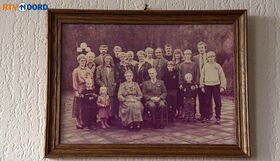 Ebeltje with Lammert and her family. 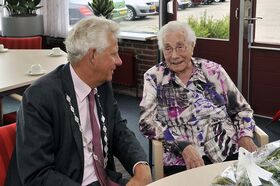 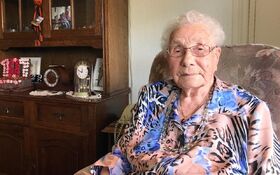 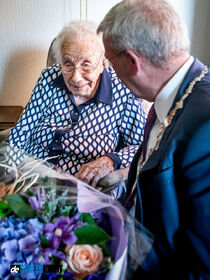 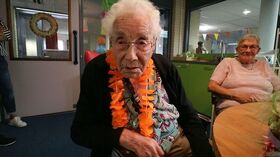 Ebeltje Boekema-Hut on her 109th birthday.
Add a photo to this gallery

Retrieved from "https://gerontology.wikia.org/wiki/Ebeltje_Boekema-Hut?oldid=171673"
Community content is available under CC-BY-SA unless otherwise noted.