Wilson was born in Vienna, Ontario on 26 February 1901, was one of nine children. His parents were Coutlan Wilson and Mary (née Chute) Wilson.

In 1907, the family moved to Toronto and while at school he joined the Cadet Corps. Lying about his age, he enlisted in the Canadian Army at 15 and trained at Camp Petawawa. In November 1916, he sailed on the S.S. Grampian for England as a trumpeter with the 69th Battery C.F.A., but was returned to Canada in 1917, when his true age was discovered.

He was returned to Canada in February 1917 and discharged in February 1917. He apparently rejoined the Army once again in 1918, but his true age was discovered and was discharged as a minor. In 1919, he was hired by the Bell Telephone Company and was employed with them for almost 47 years. He moved from Toronto to Windsor and then to Stratford in 1940 and back to Toronto in 1944.

While in Stratford, he again enlisted in the Perth Regiment Reserve. At that time he was too old for active service. But he rose to the rank of Captain.

Dwight attributes his long life to the fact that he never smoked, never lied (except about his age) and attended church.

Wilson lived at Sunnybrook Health Sciences Centre in the Veterans Residence in Toronto for the last year of his life. He died in Toronto, Ontario, Canada on 9 May 2007 at the age of 106 years, 72 days from complications of a broken hip, which had occurred two weeks earlier. His death left John Babcock (1900–2010), who lived in Spokane, Washington, United States, as the only surviving Canadian veteran of the First World War. 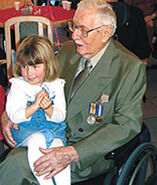 Dwight Wilson and his great-granddaughter Jamie on his 104th birthday at Cedarcroft Retirement Home in Oshawa, Ontario.