Alice Doreen Rathbone was born in Rockhampton, Queensland on 24 May 1898.[1] She married Lavington 'Bill' Ainsley Washington, a veteran of the First World War, who died in 1965. The couple had no children.[1]

Washington lived independently until the age of 103. She attributed her longevity to a very 'old school' Australian diet that included no fruit or veg, but instead a fondness for meat pies and beer.[1] Doreen Washington died in New South Wales on 4 February 2009 at the age of 110 years, 256 days[2]. She was validated by the Gerontology Research Group on 29 October 2008.[3] 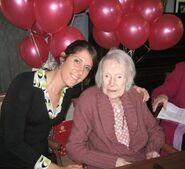