Cornelia Boonstra-van der Bijl (6 October 1910 – 15 May 2021) was a Dutch supercentenarian whose age is currently unvalidated by the Gerontology Research Group (GRG). She was the oldest living person in the European Netherlands since the death of Anne Brasz-Later (as Maria Luisa Benjamin lives in the island of Aruba).

Cornelia Boonstra-van der Bijl was born in Herwijnen, Gelderland, Netherlands on 6 October 1910 to parents Arie van der Bijl (1873–1963) and Dirkje (Ditta) van der Bijl-Exalto (1880–1976). Her father was a baker and her mother sold bread and groceries.

In 1940, she married Hendrik Boonstra. They both worked in a pharmacy called 'Casimir'. She gave birth to six children: three sons and three daughters. Hendrik died in 1963 of colon cancer and Dirk, their youngest son, died a few years before her 109th birthday. She continued to live on her own until the age of 100 years, when she moved to retirement home 'Vreedenhoff'. Despite failing eyesight and memory, she was still able to walk at the time of her 109th birthday. On her 110th birthday, it was reported that she suffers from dementia. 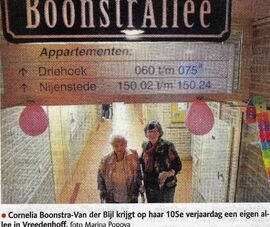 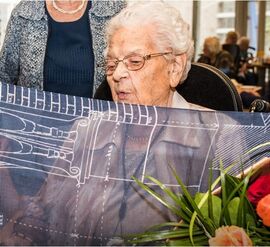 Cornelia Boonstra-van der Bijl at age 109.
Add a photo to this gallery

Retrieved from "https://gerontology.wikia.org/wiki/Cornelia_Boonstra-van_der_Bijl?oldid=170916"
Community content is available under CC-BY-SA unless otherwise noted.