Claudina Higuita de Robledo was born in El Naranjo village, Buriticá, Antioquia Department, Colombia on 30 October 1910. Her parents were Aniceto Higuita and Estefania Borja. At age 17, she married Luis Alberto Robledo and had 10 children. Her eldest son Gerardo died in 2020 at the age of 90. 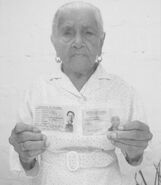 Claudina Higuita de Robledo on her 110th birthday.
Add a photo to this gallery
Retrieved from "https://gerontology.wikia.org/wiki/Claudina_Higuita_de_Robledo?oldid=154689"
Community content is available under CC-BY-SA unless otherwise noted.