Clara Depew Sutton (14 March 1901 – 26 August 2012) was an American supercentenarian whose age is currently pending by the Gerontology Research Group (GRG).

Clara Sutton was born in Rockingham County, North Carolina, USA on 14 March 1901, the oldest of eight children of James Sutton and Annie (née Webb) Sutton. She grew up on a farm outside Madison.

Because of her mother’s failing health, the responsibilities of raising her younger siblings fell to Sutton.

She never married and not had children, although a young man asked her to marry him when she was 18 and she declined.

The only driving lesson Sutton ever had was from her father. She ended up hitting the corner of the family home and cracking it. She never got behind the wheel of a car again.

Most of Sutton’s life has been spent in Rockingham County, living with her parents and looking after them until their deaths. She did make one trip to the beach and one to the mountains, and she visited a relative in Virginia.

She remained in her family home until several years ago when she broke her hip while working in her flowers. That’s when she moved to Annie Penn Nursing Center.

Her last surviving sibling Dorothy Webb died in Jun 2005 at the age of 83. 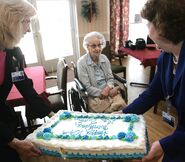 Clara Sutton on her 104th birthday.
Add a photo to this gallery

Retrieved from "https://gerontology.wikia.org/wiki/Clara_Sutton?oldid=141961"
Community content is available under CC-BY-SA unless otherwise noted.