Christine Bertha Phillips (née Kruse; 7 October 1909 – 16 December 2020) was an American supercentenarian whose age is currently unvalidated by the Gerontology Research Group (GRG). At the time of her death, she was the second-oldest known person living in the US state of Oklahoma, after Ethel Bowens.

Phillips was born on her family's farm located between Dover and Loyal in Oklahoma, USA, on 7 October 1909. She was the only daughter of John and Katie Kruse, and she had one older brother. Her father was from Hamburg, Germany, and her mother was from Nebraska, the daughter of Austrian emigrants.

In 1935, Phillips married Ralph A. Phillips (1897–1966). Their only child, Shirley, was born in 1946. The Phillips family ran a dairy farm near Hennessey, Oklahoma for many years, but when Ralph Phillips suffered from heart problems later in life, they had to sell the farm. After moving to Kingfisher, Oklahoma, she worked as a cooked in a nursing home until her retirement.

At the age of 100, Phillips was still helping to serve meals at the Wheatheart Nutrition Center in Kingfisher, Oklahoma. In 2014, Phillips was interviewed by Oklahoma State University for the Oklahoma 100 Year Life Oral History Project.

In her later years, Phillips lived in an assisted living facility in Kingfisher. In October 2020, she was forced to celebrate her 111th birthday under restrictions due to the COVID-19 pandemic. Phillips died on 16 December 2020 at the age of 111 years, 70 days. At the time of her death, she had three grandchildren, 11 great-grandchildren, and seven great-great-grandchildren.

Phillips in an undated photo 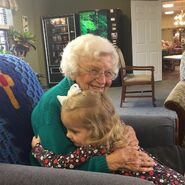 Phillips hugging a family member in an undated photo 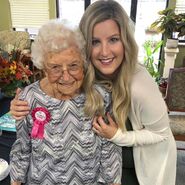 Phillips celebrating her 110th birthday with family members in October 2019

Retrieved from "https://gerontology.wikia.org/wiki/Christine_Phillips?oldid=157492"
Community content is available under CC-BY-SA unless otherwise noted.