Chester Kenneth Larson (17 October 1914 – 15 July 2021) was an American centenarian who was one of the oldest living men in Minnesota at the time of his death.

Chester Kenneth Larson was born in Artichoke Township, Big Stone County, Minnesota, USA on 17 October 1914. His parents were Michael and Minda (née Stenstuen) Larson. He was of Danish and Norwegian heritage with his father's family coming to Minnesota from Denmark, and his mother's from Norway.

He married Erna Johannah Schrock at her parent's home in Shible Township, Swift County, Minnesota on 6 November 1938. The couphe had four children: Marcella, Virgil, Sandra, and Arden. Erna died in May 2007, after 68 years of marriage.

He lived in his own home until the age of 98 when he moved into a nursing home.

There was a history of longevity on both sides of his family. His maternal great-grandmother lived to the age of 97, his paternal grandmother and his mother both lived to 101, and his father died at 95. He also had a brother and sister each live to 98 with another sister living to 99.

Larson at the age of 9 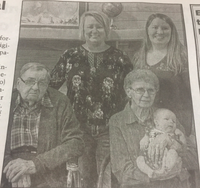