Catharina "Kaatje" van Dam-Groeneveld (20 November 1887 – 16 February 2001) was a Dutch supercentenarian, who was the first Dutch person to celebrate her 112th and 113th birthdays, thereby extending the Dutch longevity record from 111 to 113 years. Later, her age would be surpassed by Hendrikje van Andel-Schipper in 2003 and Geertje Kuijntjes in 2018.

Mrs Van Dam-Groeneveld was born to parents Bartholomeus Groeneveld and Maria Elisabeth Molenaar as Catharina Angenita Groeneveld in Leiden, a city in the coastal area of The Netherlands, on 20 November 1887.[1] She grew up at the Koolgracht in Leiden in a poor family, but at the time of her 109th birthday remembered being happy with what the family had; on top of that, people would help each other out when in need. [2]

In 1911, Mrs Van Dam-Groeneveld married her husband Jacob van Dam,[3] a gardener, with whom she would have ten children. Later, she would describe her marriage as the most beautiful moment in her life; she could vividly recollect being ridden to church in a coach and taking note of the rare and occasional T-Ford. Money for a honeymoon was not available.[2] Mrs Van Dam-Groeneveld's husband would die in 1958, described by her as one of the saddest moments in her life (as well as having outlived four of her ten children at the time of her 109th birthday).

In later life, Mrs Van Dam-Groeneveld remained very healthy and strong for her age. At age 91, she survived an intracranial bleeding and went to the hospital for the first time at age 105, after she broke her hip. At age 112, it was said that her mind was still intact. She also was a religious lady, as she loved to read the Bible and singing different psalms.[4] She admitted to liking all of the media attention, but also expressed the wish not to live too long. She was taken care of by her son Cor, who admitted on her 113th birthday that mentally she was growing weaker. The press wasn't welcome that year, which explains why there are no pictures of Mrs Van Dam-Groeneveld on her 113th birthday.[5] About three months later, Mrs Van Dam-Groeneveld would die on 16 February 2001 at the age of 113 years, 88 days, the cause of her death reportedly being pneumonia.[6] She was outlived by four surviving children, as well as 18 grandchildren, 26 great-grandchildren and ten great-great-grandchildren. 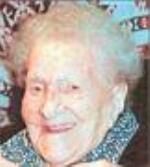 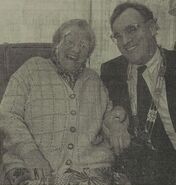 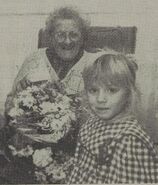 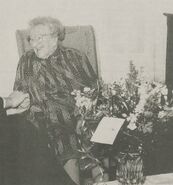 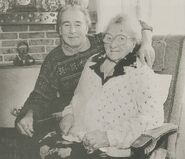 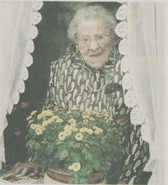