In December 2020, Benegas recovered COVID-19 at the age of 113 years and 8 months; this was the oldest age at which anyone is confirmed to have contracted the disease and survived, until who Lucile Randon survived the disease in January 2021. She was the second-oldest living survivor of COVID-19, behind Maria Branyas Morera who survived the disease in April 2020, shortly after her 113th birthday.

In 2000, at the age of 93, she emigrated to Spain but 13 years later she returned to Mar del Plata to settle permanently.

Casilda Benegas currently lives in Mar del Plata, Buenos Aires, Argentina. On 13 May 2020, she surpassed the age of Virginia Moyano (1904–2017) to become the oldest validated person ever to live in Argentina.

On 10 December 2020, Benegas tested positive for COVID-19 during the coronavirus pandemic, but was asymptomatic. By 23 December 2020, she had successfully recovered, making her the oldest known survivor of the disease, until Lucile Randon survived the disease in January 2021. However, she was not the oldest known living survivor, as Maria Branyas Morera of Spain, who recovered from COVID-19 in April 2020, is five weeks older.

On 30 March 2021, aged 113, Benegas got vaccinated against COVID-19, making her one of the oldest people to receive the vaccine.

Benegas as a young woman

Benegas (left) as a young woman with her husband Benigno 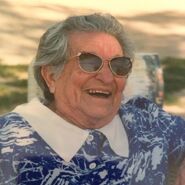 Benegas with her children and grandchildren in ~1990-2000

Benegas at the age of 107 in Barcelona, Spain with 5 generations

Benegas on her 108th birthday with her relatives in 2015

Benegas on her 109th birthday with her relatives in 2016 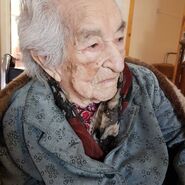 Benegas on her 114th birthday with her relatives in 2021