Carl Berner died in New York City on 7 January 2013, a few weeks before his 111th birthday.

Before his death he was the second-oldest living American man whose age had been validated, behind James McCoubrey. He had also been the oldest living man in New York City for at least the last two years of his life.[3]

At the time of his death he was the second-oldest validated German-born man ever, behind Hermann Doernemann, who lived for 111 years, 279 days.

Berner at age 104 with the then-Mayor of New York City Michael Bloomberg. 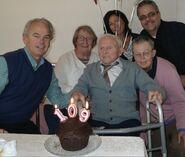 Berner on his 109th birthday.

Berner on his 110th birthday.