Boris Pahor, OMRI (born 26 August 1913) is an Italian novelist in the Slovene language who is best known for his heartfelt descriptions of life as a member of the Slovenian minority in pre-Second World War increasingly fascist Italy. as well as a Nazi concentration camp survivor. In his novel Necropolis he visits the Natzweiler-Struthof camp twenty years after his relocation to Dachau. Following Dachau, he was relocated three more times: to Mittelbau-Dora, Harzungen and finally to Bergen-Belsen, which was liberated on 15 April 1945.

His success was not instant; openly expressing his disapproval of communism in Yugoslavia, he was not acknowledged and was probably intentionally overseen by his homeland until after Slovenia had gained its independence in 1991. It was not until 2013 that his novel was first translated into English. The first translation (in 1995) was titled Pilgrim Among the Shadows and the second one (in 2010) Necropolis. The masterpiece has been translated into several other European languages; French: Pelerin parmi les ombres (1996), German: Nekropolis (2001, 2003), Catalan: Necropolis (2004), Finnish: Nekropoli (2006), Italian: Necropoli (2008), Serbian: Necropola (2009), Spanish: Necrópolis (2010), Dutch: Nekropolis (2011), Croatian: Nekropola (2012), Portuguese: Necropole (2013) and Esperanto: Pilgrimanto inter ombroj.

Pahor is a prominent public figure in the Slovene minority in Italy, who were affected by Fascist Italianization. Although a member of the Slovene Partisans, he opposed Titoist Communism as well. He was awarded the Legion of Honour by the French government and the Cross of Honour for Science and Art by the Austrian government, and was nominated for the Nobel prize for literature by the Slovenian Academy of Sciences and Arts. He refused the title of honorary citizen of the capital of Slovenia because he believed that the Slovene minority in Italy (1920–47) was not supported the way it ought to have been during the period of Fascist Italianization by right-wing or left-wing Slovenian political elites. Pahor was married to the author Radoslava Premrl (1921–2009) and, at the age of 99, wrote a book dedicated to her. He is, in addition to Slovene and Italian, fluent in French.

Following the death of Marko Feingold on 19 September 2019, he became the oldest living survivor of the Holocaust.[citation needed] 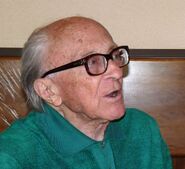 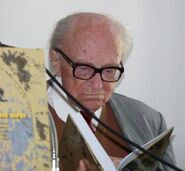 Retrieved from "https://gerontology.wikia.org/wiki/Boris_Pahor?oldid=174357"
Community content is available under CC-BY-SA unless otherwise noted.