Bessie Hendricks (née Sharkey; born 7 November 1907) is an American supercentenarian who is the oldest known person living in the U.S. state of Iowa. Her age has been validated by the Gerontology Research Group.

Bessie Sharkey was born on a farm in Carroll County a few miles southeast of Auburn, Iowa, on 7 November 1907. She was welcomed by her parents, Hugh and Mattie (Clark) Sharkey, along with older siblings John, David, Laurence and Ethel. A younger sister, Anna, was born in 1910 after the family had moved in 1908 to a 160-acre farm two miles east and one mile north of Lake City in Calhoun County.

At the age of 5, Hendricks began attending first grade – there was no kindergarten – at the country school across the road from the family’s farm. When she wasn’t in school, she helped with chores at home. By the time Bessie Hendricks entered seventh grade, the local country school was closed to due lack of pupils, so she attended Central School in Lake City. A more profound life change would occur, however, when Hendricks’ mother passed away from illness on 2 July 1921. Thereafter, 13-year-old Bessie Hendricks had to assume many more household responsibilities. She continued her education, however, and graduated from Lake City High School in May 1926. A little over 90 years later, she attended the all-school reunion in Lake City in the summer of 2016. During her high school years, Hendricks completed a normal training course that allowed her to teach country school following her graduation. Starting in the fall of 1926, she taught country school in the Lake City area for four years.

Just before she started her last year of teaching, Hendricks attended a dance in Lohrville one evening with a friend named Art Hendricks, who had an older brother named Paul. After Paul and Bessie married on 27 June 1930, at the Woodlawn Christian Church, the couple lived in Rands for nearly three years. Paul Hendricks worked at the grain elevator and depot, in addition to running a small store. The couple’s first two daughters, Shirley and Joan, were born during this time. In March 1933, the young family moved to a farm east of Lake City that would be the Hendricks’ home place for the next 47 years. The family expanded to include Roland (Ron), Glenda and Leon. After Paul and Bessie Hendricks retired and held their farm sale in 1979, they moved to a home in Lake City in July 1980. The couple were one month shy of celebrating their 65th anniversary when Paul Hendricks died on 25 May 1995.

In her later years, Hendricks stayed busy helping her family with various projects, including processing 500 chickens one summer. She was also active in the Woodlawn Christian Church, where she has been a member for 92 years.

As of the present day, Bessie Hendricks is the oldest living person in the state of Iowa.

Bessie Hendricks as a young woman. 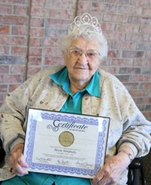 Bessie Hendricks on her 111th birthday

Bessie Hendricks on her 112th birthday.