Besse Berry Brown was born on 26 August 1896 in Tennessee to Richard Brown and Angeline Berry. She graduated in 1916 from East Tennessee Normal School (now East Tennessee State Unitversity). She worked as a teacher. She moved to Georgia in 1917, and married Luther Cooper in 1924. He died in 1963. Besse and Luther Cooper had four children: Angeline (born 1929), Luther Jr. (born 1932), Sidney (born 1935), and Nancy (born 1944). In 2009, after Beatrice Farve died, Besse became the oldest resident of Georgia, and became the oldest living person after Maria Gomes Valentim died on 21 June 2011. Besse Cooper died on 4 December 2012 at the age of 116 years, 100 days as the eighth-oldest person on record.

Cooper was the 8th person to reach the age of 116 or more; after Chiyono Hasegawa's death she became the last verified person born in 1896. She is also one of the 3 people to have lost the title of the oldest person but later regained it, the other two being Elizabeth Bolden and Jeanne Calment.

Besse Cooper died on 4 December 2012 at her nursing home in Monroe, Georgia. She was survived by all of her children, 11 grandchildren, 13 great-grandchildren and 2 great-great grandchildren. Her son Sidney said that she "looked very good" when she died. She died at the age of 116 years, 100 days as the 8th oldest person ever recorded and the last person born in 1896. After her death, the Italian born-resident of Johnston, Dina Manfredini, became the oldest living person, but died 13 days later and was succeeded by the Japanese man Jiroemon Kimura. Though Jiroemon Kimura's birthdate is recorded as 19 April 1897 his nephew claimed he was born on 19 March 1897 and his birthdate was recorded wrong when the records of Kimura's neighbourhood were being rebuilt in 1955, if this is true he would be older than Manfredini and would have become the oldest living person after Besse Cooper herself died. She is currently the 14th-oldest person on the all-time list of oldest validated supercentenarians.

Besse Cooper as a young woman.

Besse Cooper in her 40s.

Besse Cooper in her 90s. 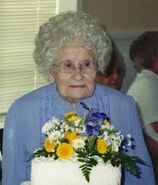 Besse Cooper at the age of 115.
Add a photo to this gallery

Retrieved from "https://gerontology.wikia.org/wiki/Besse_Cooper?oldid=170007"
Community content is available under CC-BY-SA unless otherwise noted.