Bernard Dean "Barney" Myers (13 September 1910 – 5 September 2020) was an American centenarian. At the time of his death, he was the 5th oldest living man in the United States, and the 2nd oldest living person in the state of Montana, dying just one week shy of his 110th birthday.

Myers was born in Frankfort, South Dakota on 13 September 1910. When he was aged 8, WW1 ended. “Church bells were ringing,” he later recalled nearly 90 years later. “Everybody was excited.” In 1927, he graduated from Wibaux High School. While he initially didn’t intend on attending university, his interest in joining the air force necessitated that he study engineering for two years, so he enrolled at Montana State College, costing him 100 dollars per year, which he saved up for by driving combines for farmers, earning 50 cents an hour. It was then when he met secretary Margaret “Bess” Griffiths; the couple were married from 1935 until her death from Alzheimer’s in 1996.

He worked as a math teacher and track coach at Billings Senior High from 1943 until his retirement in 1973 at the age of 62. Among his students was physicist Loren Acton, who later spent 7 days in space aboard shuttle mission STS-51-F, working as a payload specialist in Spacelab 2. Myers would later return to Montana State College at the age of 103 to commemorate the 80th anniversary of his graduation, becoming the first graduate in the school’s history to achieve this milestone.

Even in his centenarian years, Myers had continued to lead a health-conscious lifestyle, and could still walk with the aid of a walker at 109 despite suffering from kyphosis (hunchback). At the age of 107, he was still a member at the YMCA, and claimed to have only missed one day of working out. His daughter, Joanne Elizabeth Schulze, died on 3 August 2020 at the age of 83. 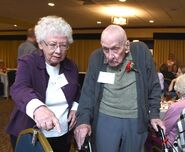 Aged 109 with his daughter Joyce Fletcher.