Antonio Fernandes de Castro (6 January 1898 – 22 June 2009) was a Portuguese supercentenarian, who was, at the time of his death, the oldest living man in Portugal, and the last living Portuguese man born in the 1800s.

Antonio de Castro was born in Durraes, Barcelos, Braga Portugal on 6 January 1898. His parents were Joaquim Jose de Castro and Maria Fernandes. He married in 1926 with Antonia da Costa and became a widow in 1984, when he was 86 years old. The couple had 10 children.

On 13 February 2009, Antonio de Castro became the oldest living person in Portugal following the death of 112-year old Augusto Moreira de Oliveira. He died in Durraes, Barcelos, Portugal on 22 June 2009 at the age of 111 years, 167 days. 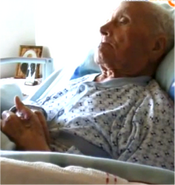