Antonina Partyka (22 September 1908 – 17 November 2020) was a Polish supercentenarian whose age is currently unvalidated by the Gerontology Research Group (GRG). At the time of her death, she was the second-oldest living person in Poland, after Tekla Juniewicz.

Antonina Partyka was born in the village of Komaszyce, located in present-day Gowarczow Commune, Swietokrzyskie Voivodeship, Poland. In 1953, she moved to the village of Bojadla, Lubuskie Voivodeship, where she spent the rest of her life. Partyka attributed her longevity to the avoidance of alcohol, smoking, and greasy food, as well as drinking a cup of water every morning.

Following the death of Irena Smialowska on 30 March 2019, Partyka became the second-oldest living person in Poland. On 19 July 2019, she was visited by the GRG's Poland Correspondent Waclaw Jan Kroczek. On 22 September 2020, Partyka became only the second person in the history of Poland to reach the age of 112. She died on 17 November 2020 at the age of 112 years, 56 days. 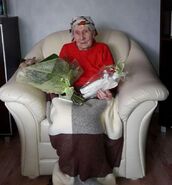 Antonina Partyka on her 109th birthday. 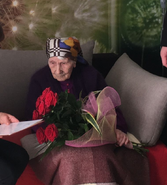 Antonina Partyka on her 110th birthday.