Antonia Santa Cruz claims to have been born on a farm that then belonged to Queimadas, near Santaluz, Bahia, Brazil, on 13 June 1905. Her parents were Francisco Pereira de Santa’Anna and Anna Maria de Jesus. She was born on the feast day of Saint Anthony, which is why her parents named her Antonia. She had 11 children. She also adopted her nephew, Jose Luiz Medrado (aged 64 in December 2019). 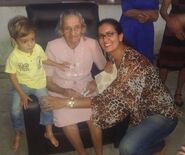 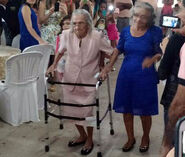 Antonia Santa Cruz at 112 with her daughter on the right

Antonia Santa Cruz at 115 with her daughter on the right
Add a photo to this gallery
Retrieved from "https://gerontology.wikia.org/wiki/Antonia_Santa_Cruz?oldid=142916"
Community content is available under CC-BY-SA unless otherwise noted.