Anna Ethelina Garrett (née Byrdsong; 26 July 1908 – 27 May 2021) was an American supercentenarian and the fourth-oldest known person ever to live in the U.S. state of Indiana. Her age is currently unvalidated by the Gerontology Research Group (GRG).

Anna Byrdsong was born in Sparta, Georgia on 26 July 1908. Her parents were Ashely Brydsong/Byrdsong and Elsie Stanley. She had 15 siblings. She moved to Indianapolis, Indiana in 1922. Her father was a sharecropper, and when Anna was young she helped her father in the fields.

Anna Garrett died in Indianapolis, Indiana, United States, at the age of 112 years, 305 days. She was survived by her sister Gertrina Ellerson, her two daughters, five grandchildren, four great-grandchildren, her great-great-grandson Aidan Gonzales, many nieces, nephews and cousins. 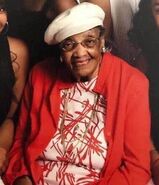 Anna Garrett in an undated photo

Anna Garrett on her 108h birthday 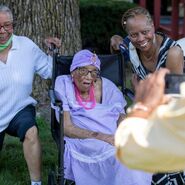 Retrieved from "https://gerontology.wikia.org/wiki/Anna_Garrett?oldid=174285"
Community content is available under CC-BY-SA unless otherwise noted.