Mary Abigail Crawford was born in Milledgeville, Baldwin, Georgia as the daughter of Charles and Anna Orme Crawford. She married George Fort Milton in Baldwin on 19 September 1904. The couple had three daughters. She was widowed in 1924.

Abby was a leader in the women's suffrage movement in Tennessee and was active politically regarding women not having the right to vote. In 1920 the 19th amendment was ratified, which gave women the right to vote. She was the first president of the Tennessee League of Women and in 1924, seconded the nomination of William Gibbs McAddoo as a presidental candidate at the Democratic National Convention. Abby also wrote several books and poems. Abby Milton died in Clearwater, Pinellas, Florida on 2 May 1991, aged 110 years and 85 days. 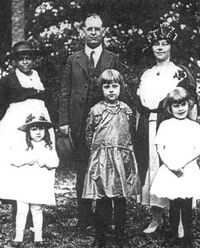 Abby Milton with her family in 1923 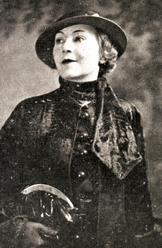 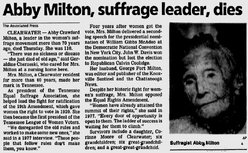 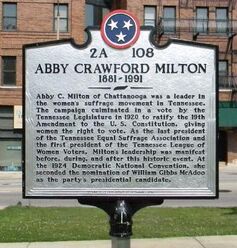 Plaque honoring Abby Milton
Add a photo to this gallery
Retrieved from "https://gerontology.wikia.org/wiki/Abby_Milton?oldid=123039"
Community content is available under CC-BY-SA unless otherwise noted.