Sorry, it only gave me 90 letters so I had to make it brief.

My 78 year old grandmother and I do our family tree together and she sent me some photos of a card of a Mr. Robert George Coles' funeral. It states he passed away on the 27th January 1914 in his 106th year. My grandmother said she asked her mother about it (my great grandmother who sadly passed away at 97 in 2015) about it and her mother's younger sister (my great great aunt Dorothy who passed away in 2019 aged 90). Neither of them could remember who he was as they were 94 and 83 when asked.

When we recently rediscovered it in one of my great Grandmother's albums we started trying to search for him. I have been unable to track down anymore information apart from the fact he is my great grandmother's mother's father's father's father and that he was born in 1808 and died in 1914 in Croyton, Surrey, England. Considering he lived to 106 and was born in 1808 and the last person from 1808 died in 1917 this means he must have been one of the last living people from 1808 one would assume. I was just wondering if there was someone or a site that I could get in touch with who might have some records on him due to his age. Thanks a lot. :) 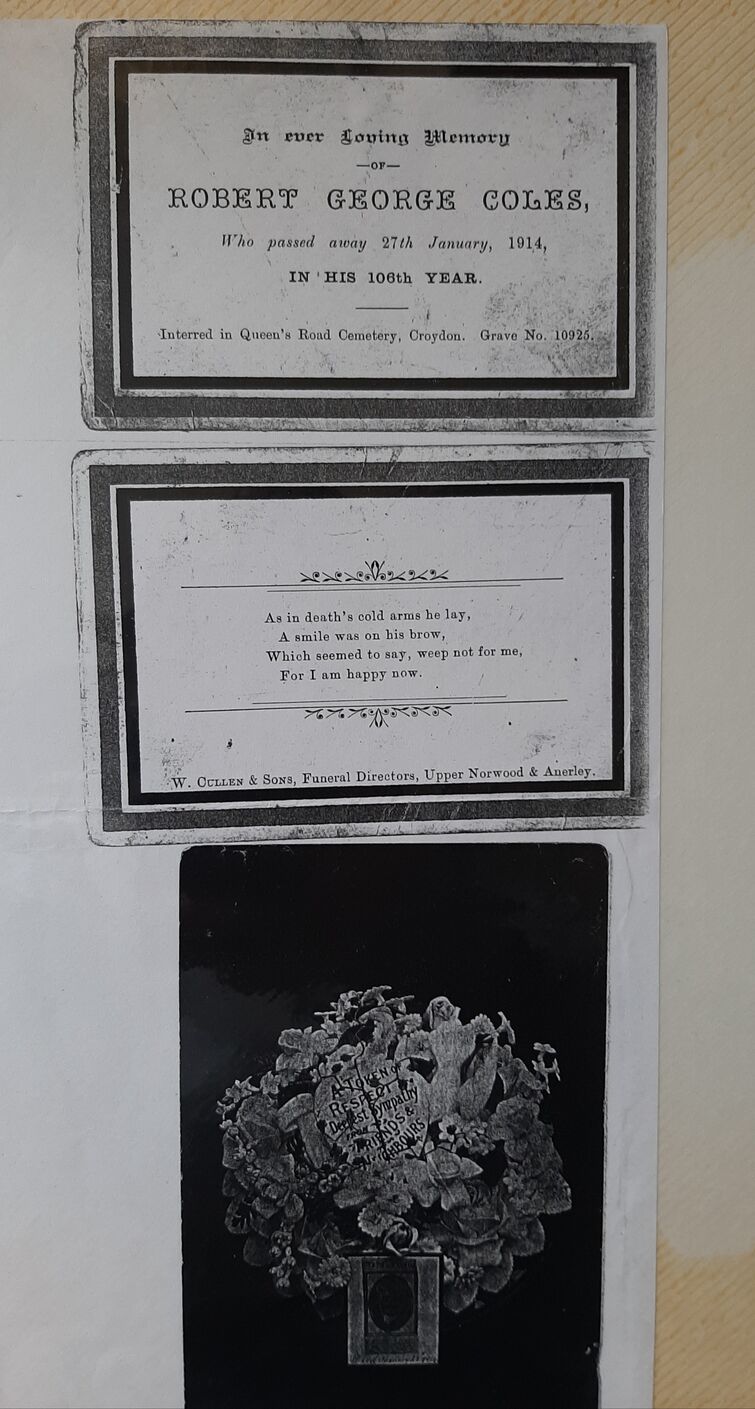 Here is his death record, which states an age of 105:

Do you have any more info i.e. spouse, children, parents, place of birth etc. that can be used to locate potential census records?

Thanks Richard, unfortunately I do not know his parents sorry. His son who I come from was called Charles Robert Coles. I have found a possible brith record suggesting Robert George Coles was born in 1808 in Bishops Hull, Somerset. The birth record you have found suggests he was born in 1809 which I know is a year off. I know the family lived in Bristol and in Monmouthshire around that time so he could have lived there at some point. He eventually died in Surrey though. I have looked up his grave but its unfortunately been dug up and redone since his death so that doesn't provide any info.

I believe these are his 1851 and 1861 census matches. Robert Coles (born around 1808 in Bishop's Hull, Somerset) was living in Taunton, Somerset with his wife Hester/Esther, and one of their sons is called Charles (born around 1834).

That's all I've found as of yet. Do you know for sure if these belong to the same Robert Coles who died in 1914?

Yes those I am pretty sure are him. I've also found a birth and a death record for his wife Hester. She was born in 1800 and passed away in January 1896 aged 96, so she was doing well as well! I couldn't however find a birth record for Robert. I did however find one for a Robert Coles born in 1805. Only thing that I could find that had any baring on him. That would however but him at 108 or 109 depending on whether his birthday is before 27th January when he died. 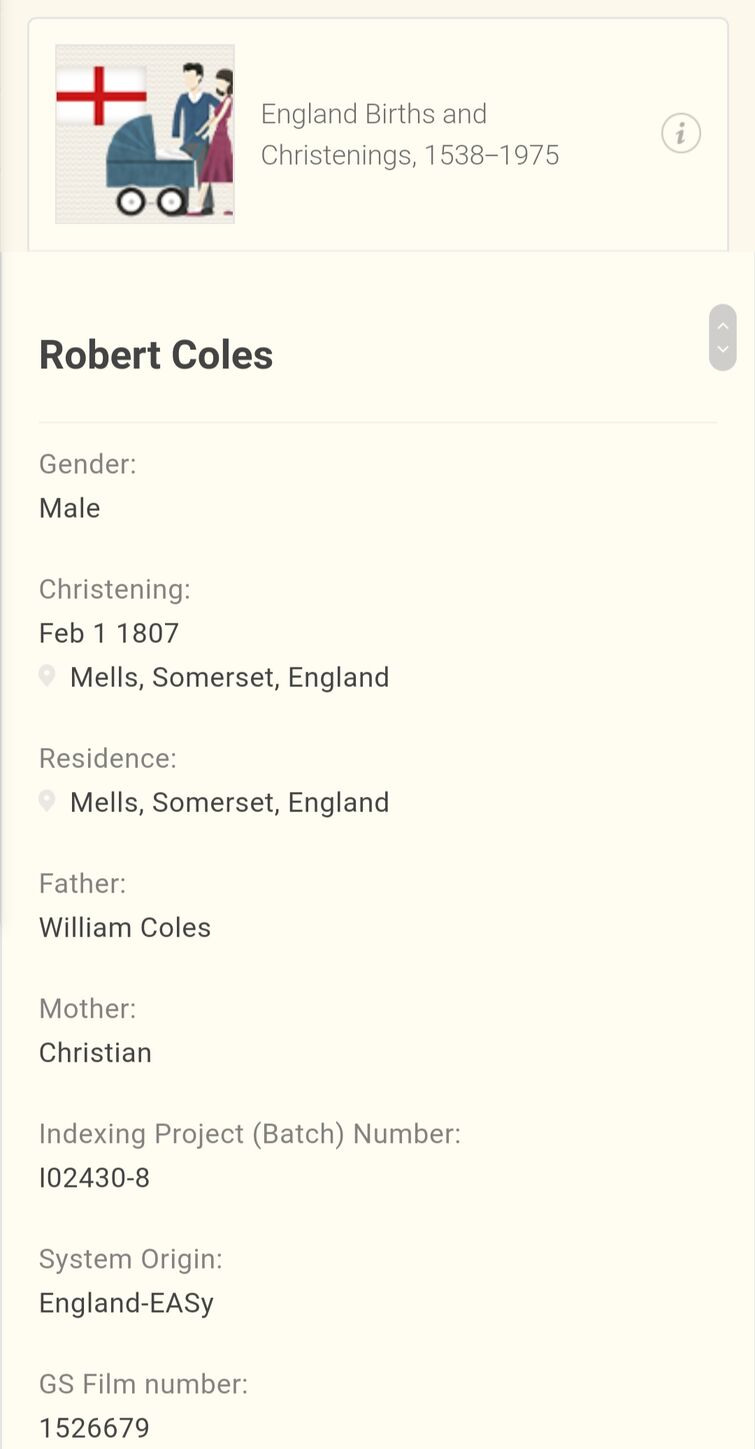 I think I've found his christening record! There were no other birth/christening records that could be him apart from that 1805 one (which I would assume is wrong otherwise the funeral card would say 108/109 not 106).

I assume he must have been born around that date because people usually baptised their kids at a very young age in those days. I was reading something that said it was seen as wrong to put off the baptism of your child longer than eight says after the birth in the late 1700s early 1800s.

Also, the record you posted earlier says he died "in his 106th year" which means age 105 (born either 1808 or 1809). Maybe his baptism record hasn't been indexed, has been lost, or he was never baptised at all.

It could well be as he died in Croydon Surrey which is 163 miles from his birth place. I also know for a fact that his son moved to Gloucestershire and Warwickshire and his grandson ended up moving to monmouthshire in wales. They obviously had itchy feet! 😂

Shame about the lack of records for him though. Maybe once lockdown has ended I'll make a trip to Bishops Hull and see if they have anymore records there that haven't been documented yet. I see what you mean about it stating his 106th year though. Although, that could still mean he was born in 1807 as he wouldn't have reached his 107th birthday and 107th year yet if he was born in February. 106th year means he had either reached his 106th or was in the year of his 106th birthday. Depends on how they were wording it.

I'll have to have a proper good look through all my great grandmother's albums and records when I can visit my grandmother after lockdown. See if there is anymore information on it. One would assume there would he pictures pr something at least considering there would have been 5 generations of the family about at the time of his death. Would have been the sort of thing in an album or photographed at least. I will post something in the future about it if I find anymore information as we are pretty stuck at this stage. 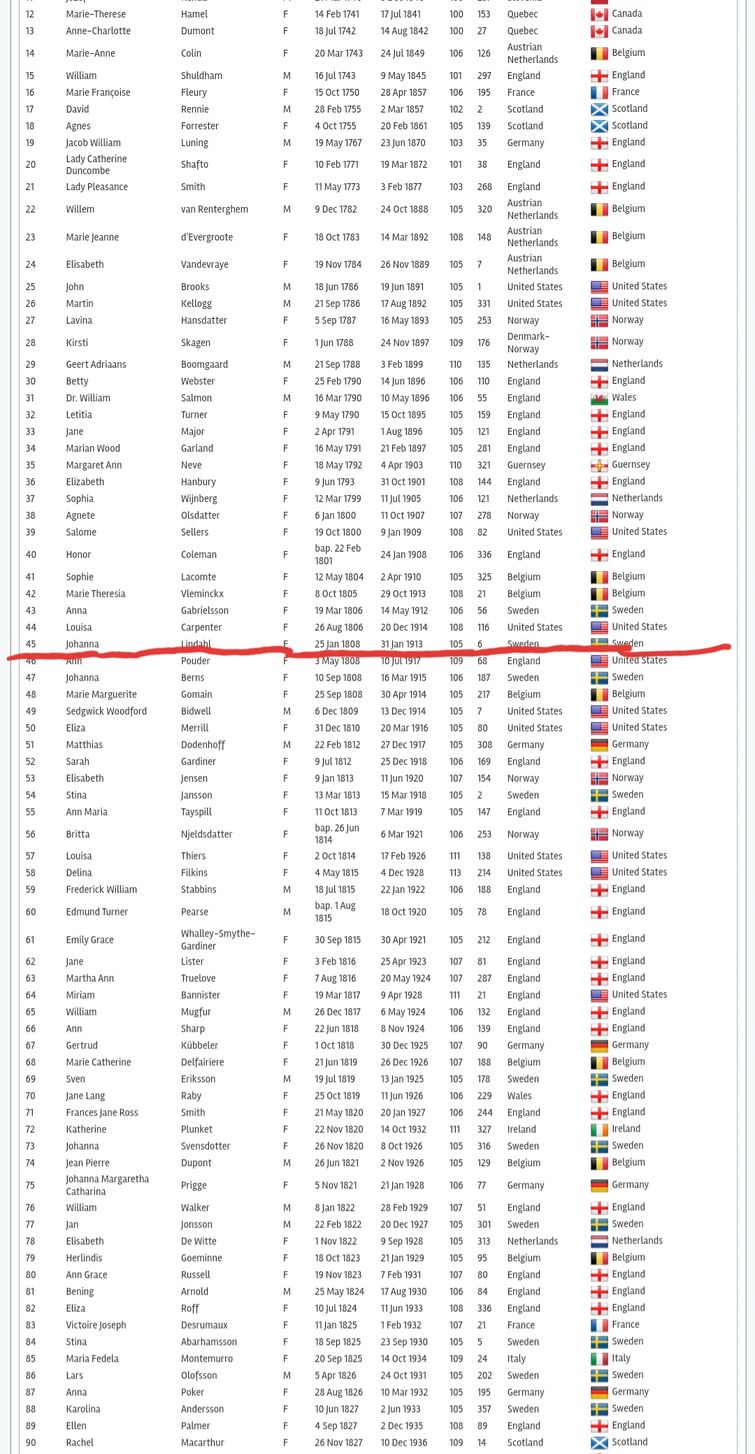 Looking at this list of oldest people in the world at that time. Considering he was born the same year as the oldest person in the world and lived a year after her. That would suggest he was one of, if not the oldest living people in Enlgand at the time of his death. Must be some records of him somewhere.

What do you think?